The initiatives listed on this page were developed, executed, phased out, and/or updated to be included in the college's current ongoing work. For current initiatives, please visit the Mission, Vision, Values, and Core Themes page.

In September of 2013, Lake Washington Institute of Technology (LWTech) embarked on a year-long process to develop a community-driven Strategic Plan. This plan, approved by the Board of Trustees in September of 2013, was a five-year plan guided by the Institute's four core themes. During the 2014-215 academic year, LWTech embarked on a three-part process to implement and assess the strategic plan. In 2016-2017 the college embarked on developing a newly updated strategic plan for 2017-2020, which included sunsetting the 2013-2017 plan. 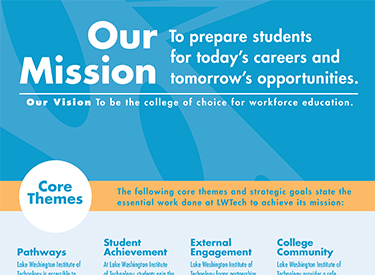 During Spring 2014, our campus engaged in a series of focus groups and individual interviews facilitated by Drs. Christine Clark and Mark Brimhall-Vargas to gain an understanding of diversity at LWTech. Based on those conversations, the consultants prepared a report outlining their findings.

As a result, in March 2015, the Lake Washington Institute of Technology Board of Trustees adopted the new Equity, Diversity, Inclusion Plan (EDIP).

Learn more about Equity, Diversity, and Include initiatives at LWTech.

Meeting enrollment targets is more critical than ever and cannot be accomplished through marketing and outreach alone. Retaining students and helping them persist to earn degrees and certificates is a necessity for both individual and institutional success. The Completion Initiative focuses on high-impact practices using student achievement data to inform how and where we make changes to college policies, procedures, programming, and staffing.

During the 2014-2015 academic year, 11 task forces met to move the college forward, with several key results: 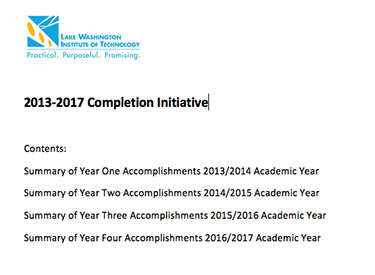